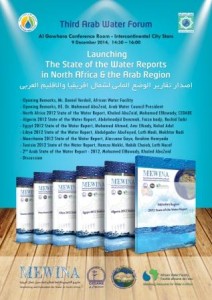 On the occasion of the conclusion of the first phase of the project, CEDARE organized the Round-Table Meeting of Donors on 8th of December 2014, to publicize the major outputs of the project that include State of Water reports 2012, in addition to the Rapid Assessment Reports for monitoring and evaluation of the water sector, at the regional and national level and the shared basins and aquifers.