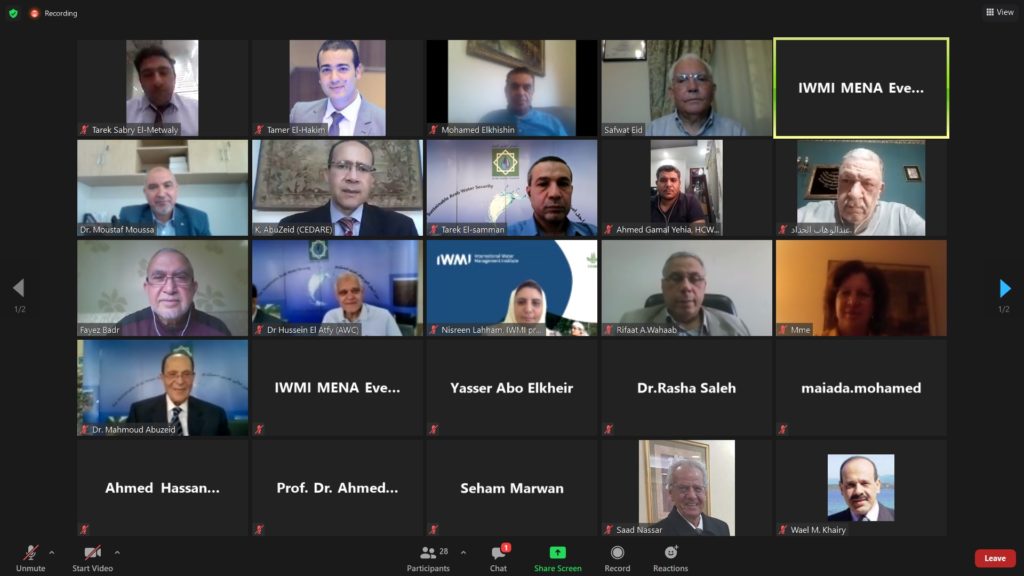 The Center for Environment and Development for the Arab Region and Europe (CEDARE) organized, the Fourth National Learning Alliance Dialogue on Water Reuse to validate the national and local targets for water reuse 2030. CEDARE is working within the framework of the ReWater project, funded by the Swedish Development Agency International (SIDA), and in partnership with the International Water Management Institute (IWMI) and other partners.  The workshop was held in the presence of many experts in this field, including the Ministries of Housing, Agriculture, Environment, Water Resources and Irrigation and the Holding Company for Drinking Water and Sanitation.

Dr. Khaled AbuZeid, Regional Director of Water Resources at CEDARE, welcomed the participants and opened the dialogue on validation of the water reuse targets. The targets of water reuse include both National and Local Targets.

There are 14 national targets, divided into 7 groups which include:

The local targets for reuse include 10 targets that are projects aimed at reusing water and are divided into 4 groups, which include:

The dialogue aimed to agree on the 2030 targets to address water use in its final form and to develop a preliminary vision of the most important challenges that the Egyptian state could face in achieving each of these targets in preparation for preparing a national strategy for Water Reuse until 2030. 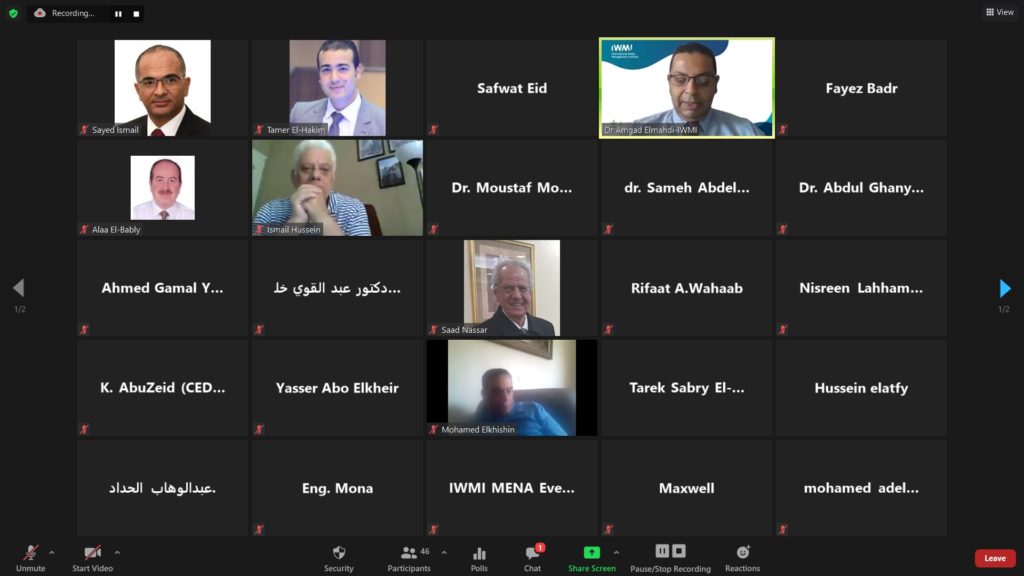 Dr. Amgad El-Mahdi, Head of the Middle East and North Africa Region Office of the International Institute for Water Management, also welcomed the importance of evaluating the drop of water in terms of quality, quality and efficiency and valuing its return and the need to take this into account in the targets of the 2030 strategy to reach a road map for Egypt in safe and sustainable reuse for treated water. 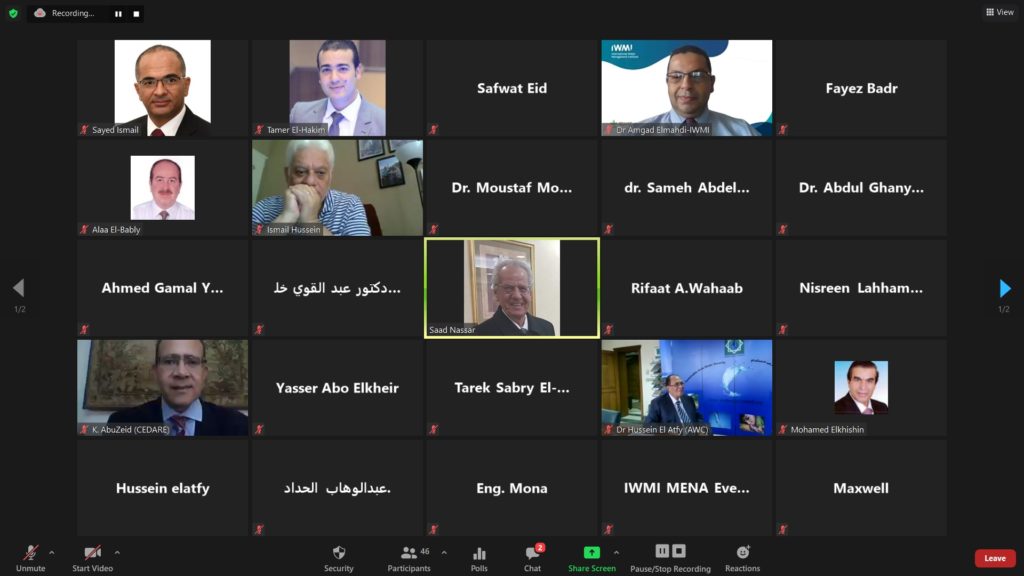 Dr. Saad Nassar, a former advisor to the Minister of Agriculture and the former governor of Fayoum, indicated in his speech that agriculture is the main consumer of water in Egypt, representing about 80% to 82% of available water, and that there is a deficit in water resources.  Water availability is a challenge in light of the limited water resources and in light of the expansion of reclamation. The main goal of the updated strategy for sustainable agricultural development 2030 is the sustainable use of water resources. He stated that re-use of water after treatment is a major goal of rationalizing water resources and obtaining the highest return of every drop is one of the objectives of the Ministry of Agriculture. He pointed to the cooperation between the Ministry of Water Resources and Irrigation and the Ministry of Agriculture in adopting the use of modern irrigation methods in Upper Egypt and the developed surface irrigation in the Delta, and avoiding the voracious use of water. This national dialogue is an important step towards developing a national road map for the reuse of water after treating it, which is a national goal. 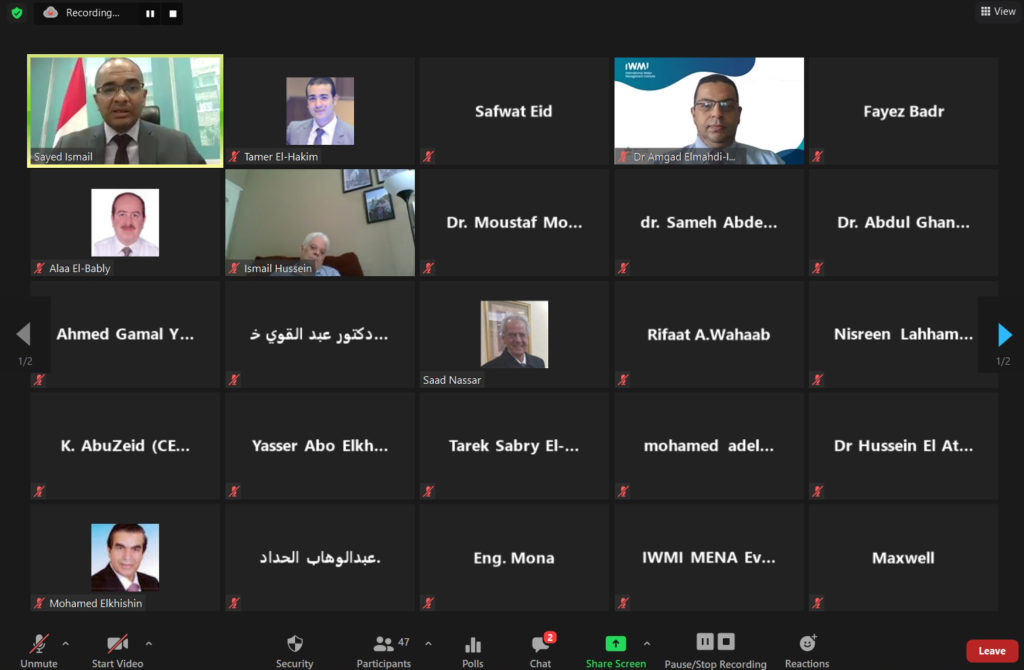 In his opening speech, Dr. Syed Ismail, Deputy Minister of Housing for Water and Wastewater Infrastructure, indicated that the integration between the state sectors and the integration between the state and the private sector are witnessing great momentum. He praised the efforts made to develop national and local targets for re-use of water resources in Egypt as one of the most important axes for achieving national security. He also referred to the remarkable shift from the policy of safe disposal of wastewater to the expansion of the safe reuse of treated sewage as a result of the increase in water demand and development. He also mentioned that the Ministry of Housing has a strategic vision based on five axes that include: 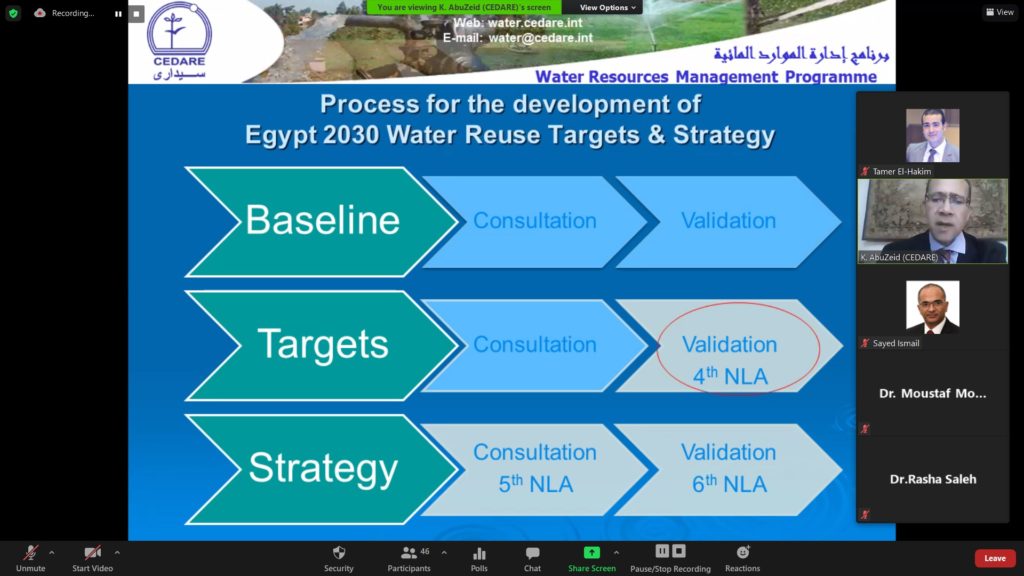 Dr. Khaled AbuZeid presented the details of the proposed national and local targets. He also showed the current and future water balance after achieving the proposed 2030 targets for water reuse. He indicated that the volume of wastewater reuse, agricultural and industrial, could reach 23 billion cubic meters annually in 2030.

The dialogue was very vivid and several recommendations were given. The most important of which was the need to develop policies that reduce the burden on the state budget in terms of treatment and reuse of drainage, the need to motivate farmers to undertake the reuse of wastewater, and the importance of directing treated drainage to the existing lands in the West Delta, west of the Cairo-Alexandria Desert Road, which are suffering from depleting groundwater because the existing investments in export and food crops are threatened. The participants also praised the mega projects to deal with mixed agricultural drainage and stressed the importance of reviewing the design capacity in light of irrigation modernization projects and the accompanying decrease in the quantities of agricultural drainage in the future, and taking into account the expected expansion of housing units in the area and the resulting sanitation that can be used. They indicated the importance of comparing the cost of transportation and treatment for direct reuse with indirect use, which may require transportation over longer distances. Participants recommended that the future orientation be more for direct use of treated wastewater than indirect use.

The experts emphasized the importance of reviewing the quality of green spaces in the new cities and adhering to the guidelines for the use of desert plants in “desert landscaping”. They emphasized the possibility of directing treated drainage for direct or indirect use of some areas of the 1.5 million acres project, whose main dependence was on water. The experts called for the importance of sustaining the operating efficiency of sewage treatment projects and applying the foundations of governance and rational management to the safe reuse treatment projects.